At Skylift, we recently had the pleasure of hosting the Silverback Security Academy at our field-testing site in Leicestershire.  During the demo, we displayed some of the capabilities our drones could provide at an event site for safety & security.

We showed Silverback a wide range of applications in which Skylift’s UAV’s could be utilised.  One example demonstrated was the use of a patrol UAV which monitors the perimeter of a site to deter and detect any site breaches to allow a response team to act. 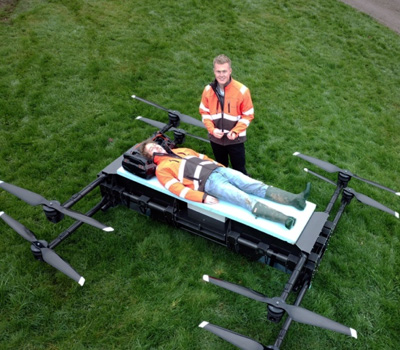 At Skylift, we believe the capabilities of UAV deployment within the security industry will provide a valuable asset for the boots on the ground giving the operatives a level of situational awareness and enhanced intelligence.  The capabilities of drone operations within an event site could incorporate perimeter patrol, fire & emergency response along with first aid and defibrillator deployment to operatives in emergency situations.  Whilst developing operational capabilities in a range of areas for Skylift providing safe and effective solutions within the security industry remains a priority.

Ah, and if you’re wondering about the picture here, then that demonstrates that drones can come in all shapes and sizes, and that big boy is the subject of another posting.